As a software engineer, there are many important things for you to take care of, like code readability, modularity, security, maintainability… Why worry about performance? Well, performance is like the currency through which we can do all the other things. For example, let’s say given 2 algorithms for a task, how can you find out which one is better? The naive way to do so is to implement both and run them for different inputs to see which one takes less time. However, there are problems with this approach:Asymptotic analysis is the idea that handles these issues in analyzing algorithms. In an asymptotic analysis, we evaluate the performance of an algorithm in terms of input size (we don’t measure the actual running time). We calculate, how does the time (or space) taken by an algorithm increases with the input size.
An algorithmic analysis is performed by finding and proving asymptotic bounds on the rate of growth in the number of operations used and the memory consumed. The operations and memory usage correspond to the analysis of the running time and space, respectively. Here are the 3 types of bounds most common in computer science:

Here the 2 major properties of these asymptotic growth rates: Out of these 3 bounds, computer scientists should focus mostly on Big-Oh Notation, which specifically describes the worst-case scenario, and can be used to describe the execution time required or the space used by an algorithm. It enables a software engineer to determine how efficient different approaches to solving a problem are. Let’s look at some common types of time complexities in Big-Oh Notation:

1 — O(1) Constant TimeConstant time algorithms will always take same amount of time to be executed. The execution time of these algorithm is independent of the size of the input. A good example of O(1) time is accessing a value with an array index.
void printFirstItem (const vector& array) {
cout << array[0] << endl;
}2 — O(n) Linear timeAn algorithm has a linear time complexity if the time to execute the algorithm is directly proportional to the input size n. Therefore the time it will take to run the algorithm will increase proportionately as the size of input n increases.
void printAllItems (const vector& array) {
for (int i = 0; i < array.size(); i++) {
cout << i << endl;
}
}3 — O(log n) Logarithmic TimeAn algorithm has logarithmic time complexity if the time it takes to run the algorithm is proportional to the logarithm of the input size n. An example is binary search, which is often used to search data sets:
int BinarySearch (const vector& array, int targetValue) {
length = array.size();
int minIndex = 0;
int maxIndex = length - 1;
int currentIndex;
int currentElement;
while (minIndex <= maxIndex) {
currentIndex = (minIndex + maxIndex) / 2;
currentElement = array[currentIndex];
if (currentElement < targetValue) {
minIndex = currentIndex + 1;
} else if (currentElement > targetValue) {
maxIndex = currentIndex - 1;
} else {
return currentIndex;
}
}
return -1; // If the index of the element is not found
}4 — O(n²) Quadratic TimeO(n²) represents an algorithm whose performance is directly proportional to the square of the size of the input data set. This is common with algorithms that involve nested iterations over the data set. Deeper nested iterations will result in O(n³), O(n⁴) etc.
for (int i = 0; i < 5; i++) {
for (int j = 0; j < 4; j++) {
// More loops
}
}5 — O(2^n) Exponential TimeO(2^n) denotes an algorithm whose growth doubles with each addition to the input data set. The growth curve of an O(2^n) function is exponential: starting off very shallow, then rising meteorically. An example of an O(2^n) function is the recursive calculation of Fibonacci numbers:
int Fibonacci(int number) {
if (number <= 1) return number;
return Fibonacci(number - 2) + Fibonacci (number - 1);
} 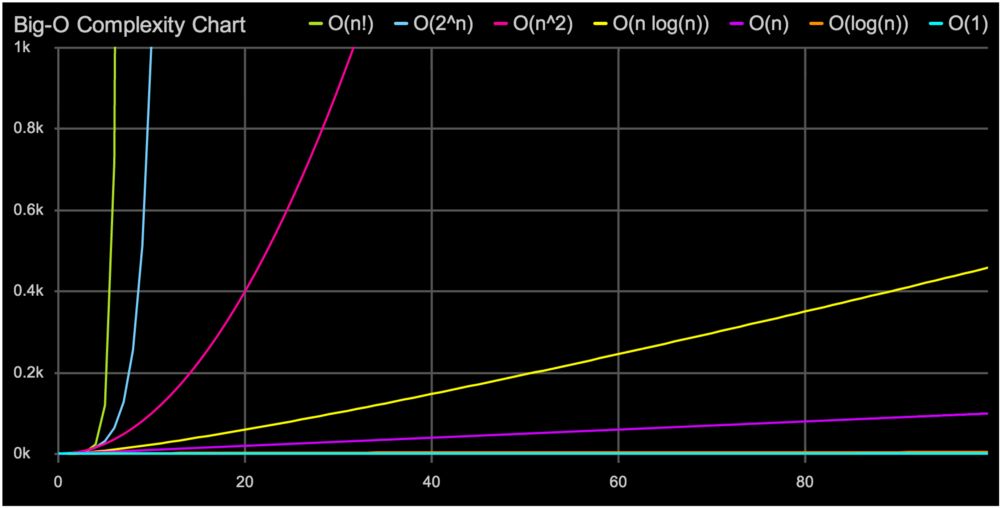 As you see, you should make a habit of thinking about the time complexity of algorithms as you design them. Asymptotic analysis is a powerful tool, but use it wisely. Sometimes optimizing runtime may negatively impact readability or coding time. Whether you like it or not, an effective engineer knows how to strike the right balance between runtime, space, implementation time, maintainability, and readability.
Next